Restaurant Week is one of the happiest times of the year. More often than not twice a year Restaurant Week is offered throughout various metropolitan cities. Participating restaurants offer three-course dinners for only $35 per person and $20 three-course lunches. Also, many restaurants will also offer a deals for couples as well. Restaurant Week is a great opportunity to experience Washington, DC’s best restaurants at affordable prices. Cuisines include Contemporary American, Mexican, French, Mediterranean, Italian, Southern, Seafood, Spanish, California, Pan-Asian and more!

This week (August 15-25) Alexandria is offering their Restaurant Week. ARW is held at a range of locales, from fine dining establishments to casual neighborhood favorites, guests savor the flavors of Alexandria’s distinctive collection of eateries. Check out the list of participating restaurants and book your table online to see why everyone including Bon Appétit and Food & Wine are raving about Alexandria’s dining scene.

My ARW week will consist of lunch at La Tasca and a date night dinner at TJ Stone’s. Are you heading anywhere speical for AWR?

I never knew Flag Day was such a big deal. Matt gave me the suggestion to write a post about Flag Day to inform people on what it is. After accepting his idea on the blog post, I realized that I had no idea what Flag Day really was either. Flag Day is actually really interesting and I am happy to hear what I’ve learned with you.

June 14, 1777 the Continental Congress adopted a resolution stated the design of the American flag, “that the flag of the United States shall be of  thirteen stripes of alternate red and white, with a union of thirteen stars of white in a blue field, representing the new constellation.”  Though the Continental Congress fought for this resolution the observance of the adoption of the flag was not seen in their lifetime. Although there are many claims to the first official observance of Flag Day, all but one took place more than an entire century after the flag’s adoption in 1777.  Both President Wilson, in 1916, and President Coolidge, in 1927, issued proclamations  asking for June 14 to be observed as the National Flag Day. But it wasn’t until August 3, 1949, that Congress approved the national observance, and President Harry Truman signed it into law.

Now to some present day facts:

The National Museum of American History of the Smithsonian Institution as part of its observance of the 200th anniversary of the Star Spangled Banner.

Dimensions are enormous: 30 by 42 feet. Fashioned of red, blue and undyed wool, with cotton for the 15 stars, the banner was planned as a bold statement to the British who were sure to come. When they did come in September 1914, Key witnessed the forceful — but unsuccessful — bombardment of the Fort. As the story goes, thus inspired, he wrote his famous words on the back of an envelope. Various Reisterstown residents, some years later, undoubtedly had chats with Francis Scott Key, Jr. and his famous father when the two came shopping in the village from Key Jr.’s home, “The Elms,” several miles up Westminster Pike.

This flag was turned over many years later to the Smithsonian, after a $7 million restoration — thanks in part to designer Ralph Lauren — now is displayed in a temperature-controlled chamber.

As we know, Father’s day is coming up. The day really isn’t about gifts and it’s more about gratitude and appreciate, but every once and a while a gift is a nice way to show appreciation as well. Father’s day is a great opportunity  to say, “Thanks for being such a great dad!” Think about the activities your dad loves – or who he loves spending time with – and focus on that as the gift…if you choose to get one for your dad. You will likely find yourself spending less money and bringing a big smile to his face.

Here are a few ideas for “dad” gifts:

Remember back in February when I was talking about the new goodies called croknots, cronuts, crodolis and so on? Well I am ready for a new treat, the beignet, which I am sure you’ve heard of. This treat is a New Orleans classic. Now, I’ve never had one, but I can only picture what it tastes like. To me, a beignet is a cross between a funnel cake and a donut. Beignets were also brought to Louisiana by the Acadians. These are fried fritters which are often a treat. Sometimes they may be savory dishes as well and may contain meat, vegetables, or fruits. From what I understand, the beignet is a square piece of dough, fried and covered with powdered sugar.

Later tonight I will be making a pit stop at the ever-famous, Café du Monde, and I am sure it is going to be a highlight of this New Orleans trip! Café du Monde is a popular New Orleans food destination that specializes in the powdered sugar beignets.

I am beyond ready to experience some New Orleans tradition!

take a moment to celebrate

How many of you know the difference between Memorial Day and Veterans Day? Well, as today is Memorial Day, let me give you the 411 on today’s much needed holiday. Memorial Day is a recognized federal holiday in the United States for remembering the men and women who died while serving in the country’s armed forces. The holiday, which is celebrated every year on the last Monday of May, was formerly known as Decoration Day and originated after the American Civil War to commemorate the Union and C

onfederate soldiers who died in the war. By the 20th century, Memorial Day had been extended to honor all Americans who have died while in the military service.

If you see a person who is dressed in their service attire, remember to thank them today after all without them, this wouldn’t be land of the free and home of the brave.

Over the weekend, there was an awesome summer kick off festival called “Summerfest DC”. Now, as you know I come from Wisconsin which is home to actual Summerfest. Summerfest back home is a BFD. In fact, it’s a big deal all over the place. Milwaukee holds the world’s largest music festival in the world. Yes, you read that correctly, Milwaukee holds the WORLD’s LARGEST MUSIC FESTIVAL and it is pretty spectacular! For 11 days, Milwaukee is flooded with people from around the world to nibble on cheese curds, drink Wisconsin beer and to jam out to their favorite music. This outdoor music festival is unlike any other. It’s incomparable.

This weekend, I had the pleasure of hitting up Summerfest DC. Yes, there was music and it was a kickoff to summer event but it wasn’t comparable to (my) Summerfest. DC Summerfest is THE official kickoff of the summertime season in our Nation’s Capital on Saturday, May 24th. Upon arrival we were handed a  tasting glass to enjoy more than 100+ Craft Beers and ciders all afternoon. That sounds good, but that’s not it along with the beers and ciders came wine. There were also unlimited tastes of 20+ wines, of all varieties! And because you get rather hungry when consuming a lot of liquids, food trucks were available for our munching. Thankfully Summerfest DC also offered live music all day and outdoor games, like bags (also known as corn hole).

Like I said, they are totally incomparable festivals but I am happy I have been able to attend both. If you live in the District and haven’t been to Summerfest DC yet, be sure to make it next year. Likewise, if you live in Wisconsin (or the surrounding area) check out Summerfest.

Mother’s day is all about celebrating the one women we can all relate to, mom. A huge Happy Mother’s Day to the women who has always encouraged me to  be different. Mom, you are my friend, my hero, and my number one fan. I am beyond blessed to have you in my life and to call you mama. I hope your day is perfect! I love ya with all of my heart.

It’s that time of year again and Spring is finally in the air. Let’s greet the Kentucky Derby with welcome arms. Sure the Derby is about horse racing, but it’s really about fashion and tradition. The Kentucky Derby is a chance for every female to express her inner Southern Belle so take notes and never hold back when planning your Derby fashion pieces!

Wearing a hat to the Kentucky Derby is believed to bear good luck!  The long-established fashion was started by the women. But, over the last few years, many men have taken part in the tradition as well.  Wearing a hat is much like getting into costume, you might be pleasantly surprised to see what type of character you become. From the fantastic to the sublime, there are no rules or limits.  In the clubhouse and paddock, women of grace and taste sport classy, fashionable styles. In the infield, the headwear has tendancy to take on a zealous character.

When celebrating the Derby this weekend be sure to toast your inner Southern Belle with a Mint Julep.

It’s the moment we have been waiting for, baseball is back. After a long winter, spring couldn’t come soon enough and with spring that only means one thing; baseball! No matter how baseball tries to disappoint you at times, Opening Day is still a welcome and special moment after that long and cold winter.

Baseball, is the greatest game of all. It is your life played across nine innings. It comes with hits, runs and errors. It is played by people who are rather isolated on the field—the pitcher, the shortstop, the center fielder—and when they make a mistake, an error, it’s there for all to see. But they do what you must do every day: Get back in the batter’s box and keep on swinging.

Today, a long-awaited, frenzied and fantastic Nationals Opening Day will start the season.

The year 2013 marks the 91st anniversary of an American tradition. Through peace and war, from national celebration to national mourning, Americans have gathered together and celebrated the season in this holiday event. President Calvin Coolidge was the first to light the Christmas Tree in 1923. He walked from the White House to the Ellipse to light a 48-foot decorated tree, as a local choir and a “quartet” from the U.S. Marine Band performed. Still, 90 years later, this American holiday tradition continues. This tradition brings citizens together to share in a message of hope and peace.

oday, the National Christmas Tree will be lit (December, 6th). The ceremony beings at 4:30 PM EST. You can watch the lighting here online or on the PBS broadcast. 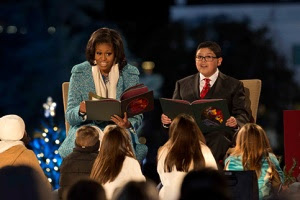 ique ornaments created by an artist and volunteers from that state, territory or District of Columbia.

Last year, I won the lottery! I had the opportunity to see the National Christmas Tree Lighting Ceremony take place, which was an awesome experience! Typically, I watched this on TV, but I never dreamt that I would be there. Sure, I live in DC, but the chances of winning tickets, are slim to none. Last year marked my first holiday season in Washington, so to me, it was a big deal that I attended the Ceremony. In addition to the ceremony, The Night Before Christmas was read to the audience, Christmas carols filled the air, and cookies were passed amongst friends.

There was an error retrieving images from Instagram. An attempt will be remade in a few minutes.

reviews by kendal ann
What's this?